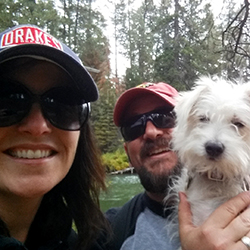 Esther has come a long way since we first met her. She was admitted to the Oakland Animal Services shelter with facial lacerations, a cracked tooth, and a broken leg. Since her leg had already set improperly and she wasn't able to walk on it, it was amputated. Two days after surgery, she met Craig. After just a few nights of fostering, Esther became a permanent part of their family.

Check out a day in the life of an office dog.