Dallas Animal Services (DAS) wasn't an obvious place for an idealist to land. Its live release percentage was in the 20s, and in 2011 the former shelter manager was indicted on felony animal cruelty charges amid public outcry over conditions at the agency.

But that's just where Dr. Cate McManus, one of the first veterinarians to complete Maddie's® Shelter Medicine Residency at the University of Florida's College of Veterinary Medicine, wanted to be: somewhere she could make a difference.

"I knew I wanted to go to a municipal shelter," she said. "I knew there would be challenges, but I wanted to do something with all the things I'd learned. I wanted to put my boots on the ground and make a positive impact and save a lot of lives."

So in 2012, she joined the agency's staff under the direction of its new manager, Jody Jones, the former head of Richmond Animal Care & Control in Richmond, VA.

Cate didn't join DAS as a shelter vet, however, but as Operations Manager. "I feel that all of my professional experiences have led me to this position," she told Maddie's Fund. "I was a veterinarian in the military, a veterinary epidemiologist with the Virginia Department of Health and earned my Masters in Public Health.

"But it was my residency in shelter medicine that brought it all together," she said. "We studied the Association of Shelter Veterinarians Guidelines for Standards of Care, which became my bible. And then I was able to interact with the very people who crafted those guidelines: the leaders in shelter medicine. The contacts and relationships were incredible."

During the residency program, she said, "We learned the ‘gold standard' to aspire to, the level of excellence that should be the standard of care everywhere. I can't imagine having to try and figure all that out on my own." 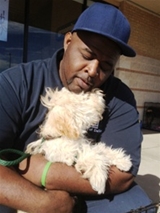 Those lessons have continued to serve her as she works to turn things around in Dallas. "I use the Guidelines all the time to explain how things should be done and why," she said. "And I also encourage the team members here to visit other shelters and agencies, which many of them never have before. That way, they can see how things are done - better and worse - elsewhere. And then we discuss it and use those experiences to make things better here."

Making things better is a tall order. By the time Jody and, later, Cate came on board in Dallas, there had already been some organizational housekeeping. Still, shelter operations were in bad shape. The shelter's heating and cooling systems didn't work, and budget cuts had led to massive under-staffing. "The shelter is only five years old," Cate said, "But some of the cat housing is inadequate, and not all the dog housing units are designed for easy handling or sanitation."

Things have undeniably gotten better since Jody and Cate took over management tasks at the shelter. Community outreach has improved, spay/neuter services are up and, most importantly, the live release rate nearly doubled.

But Cate isn't satisfied. "I'm impatient," she said. "I'm trying to move forward with a plan, one step at a time. Initially, we were just putting out fires, but now we're starting to get more proactive, as well as to work with the staff to focus on what we have accomplished. It's true that a 40% live release rate isn't much, but a year ago it was 22%. That's something to celebrate."

Getting the staff to share in a lifesaving mission is a major focus for Cate. They've been through a lot of management changes in recent years, both good and bad, and a little wariness is understandable.

"They're waiting for us to prove ourselves first," she said. "A lot of staff members are interested in learning more. They want the shelter to be successful, and I know we'll improve as we show our commitment. We'll work through the problems together, and if it doesn't work, we'll change it again."

In her capacity as operations manager, Cate brings her shelter medicine training to bear on some of the worst of the shelter's management issues, always focusing on saving more lives - even when her prescription strikes some critics as the opposite. 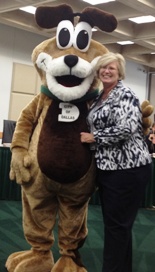 "We closed the night drop-off boxes and opened the guillotine doors between parts of the dog runs, which technically cut our capacity in half," she said. "But the number of kennels isn't what determines your capacity; it's your overall resources, including staff, and we didn't truly have that capacity. You have to do what's best for the animals even if people don't want to hear it."

The point may seem counter-intuitive, she said, but better population management doesn't mean you save fewer lives; it means you save more. "Because we have good population management in place, because opening the guillotine doors means better sanitation and less stress, we have less disease, and we are saving more lives, not fewer."

In fact, they are saving record numbers of lives through increased adoptions. The live release rate in December 2012 was 53.6%, representing 677 adoptions - an all-time record.

Both intake and euthanasia rates were at record lows for fiscal year 2011-12 as well, despite a slashed budget and crippled staffing levels.

Even with those improvements, Cate has a very long list of things that still need fixing.

"We need more consistent training for the staff," she said, "Especially in cat handling. It's hard because we have a lot of temporary workers and high turnover. There hasn't been a lot of modern training, and we need to get people up to speed with where sheltering is now."

The day Cate spoke to Maddie's Fund, she had just completed training the staff and animal control officers in preventing parvo and distemper outbreaks. They'd also been trained in customer service, disease control, animal behavior and sanitation. "We've trained them in every topic," she said. "And then later, we're going to implement more specialized training."


The goal, she said, is to modernize animal control practices, from better training to better equipment. "We plan to set an example for professional animal services," she said.

What else does Cate want to implement in Dallas? "We need to establish a volunteer and foster program," Cate said. "We need to fill a behavior and enrichment position, improve housing, hire more staff and have our own public information officer to get better media exposure."

Despite the challenges, Cate is sure they'll reach their goal of saving 90% of the animals who come in their doors in the next few years. "This is a community with lots of resources, full of engaged people who love animals," she said firmly. "I want Dallas to be a role model for the rest of Texas, the rest of the country. To be able to say that, despite our limited budget and staff, we didn't just talk the talk; we walked the walk. We saved lives."